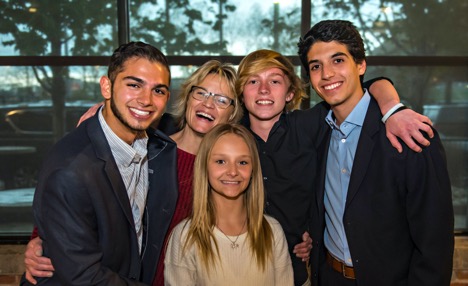 If you attended our 2019 Gala, you experienced the heartfelt surprise reunion of two Big Idea Project alum (Marcus and Daniel) and the family they partnered with for their project years before. There wasn’t a dry eye in the room as these two young men were reunited with Gail (a single mother) and her two (now teenage) children on stage.

But why was this such a meaningful reunion for these young men and this family? Wanting to know more about this story, I recently chatted with Marcus about his experience.

Marcus joined Big Idea Project in the spring semester of his senior year at Legend High School. Marcus and his team initially wanted to plan a community wheelchair basketball tournament but realized they’d likely make a greater long-term impact by focusing on helping one or a few people for the next few months.

The boys decided to reach out to their local community center and “adopt” a family in need – specifically a single mom named Gail (who was working multiple jobs and taking classes to improve her family’s situation) and her two children (who were struggling to get their homework done because their mom had to work at night). Gail told the boys during that first meeting that they were an answer to a prayer from just a few hours earlier that day: that she and her kids would find help during this tough season.

Over the next few months, these four young men spent one night a week hanging out with Gail’s children and helping them with their homework while Gail attended financial classes. As Marcus recounted the experience, he explained that he’s always wanted to be a big brother, and he was able to live out this dream as he and his buddies spent time mentoring Gail’s two children and seeing the children grow in responsibility and respect for their mom.

Over the few months of the project, these four young men became honorary big brothers to these kids, and their influence continued to inspire Gail and her children long after the project ended. This is why their reunion years later was so meaningful – this was a reunion of family members.

Marcus ended with this piece of advice for incoming Big Idea Project students who may be feeling unsure about the project: “Have hope in the project. There are a lot of moving parts, but this is something you’ll feel good about at the end, and you get to positively impact someone’s life.”

Stories about students like Marcus are the reason Big Idea Project exists. We believe that transformations like Marcus’ begin at a heart level and are solidified through the experience of stepping out and helping someone in need.

Today’s students have immense leadership potential just waiting to be unleashed and Big Idea Project is helping unleash this potential!