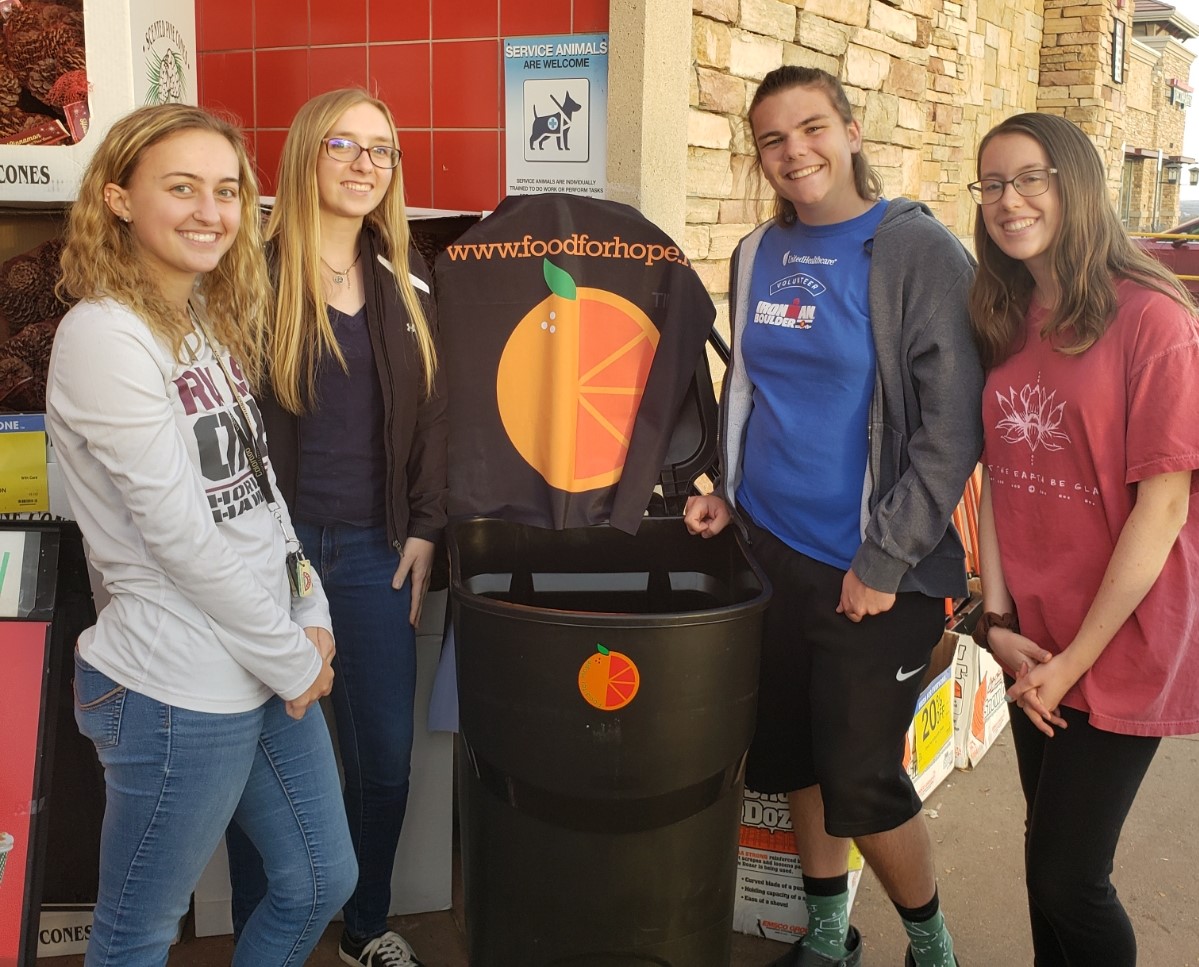 Most Big Idea Projects end with the semester, but not this one…

This last spring, a team of Big Idea Project students from Horizon High School decided to help solve child malnutrition by partnering with Food 4 Hope to organize a food drive to collect 1600 pounds of donated fruit for hungry elementary schoolers in Adams 12.

They named their project the “Stay Fresh Campaign.” Check out their Big Idea Project video here.

Most Big Idea Projects end with the semester, but not this one…

Fast forward to this fall when one of our BIP community members, Frank Milinazzo, ran into an enthusiastic group of students outside of King Soopers who were collecting food donations for Food 4 Hope. One of the original BIP team members from the Stay Fresh Campaign, Claire Lundstrom, was the spokesman for the group at King Soopers. Because of Claire’s leadership last semester, Food 4 Hope asked Claire to organize this additional food drive. Claire, who was happy to continue her work, gathered a group of students to work with her over the weekend, collecting fruit and vegetable donations from King Soopers’ customers.

The girls not knowing that Frank is a longtime supporter of BIP excitedly shared with him about what Big Idea Project does. Claire explained how BIP showed her how to be a part of making an impact on the world, and now after the official project ended, how she is able to share part of her experience with other students who had not participated but are now excited about the Big Idea Project too.

Frank shared with BIP that he was blown away by the generosity these students demonstrated by giving up their Sunday to help their community without gaining anything in return. The students were not earning school credit or any other recognition, yet they were clearly excited to be there. The girls told Frank that they were just glad to be part of something greater than themselves.

Claire later shared that the greatest lesson she learned from the Big Idea Project was the value of teamwork. She and her team persevered through communication challenges because they were passionate about their cause. She realized an important leadership lesson: as a team they could accomplish so much more together than they could working apart. And this lesson was what motivated Claire to assemble and lead a new team so that she could continue to feed Adams 12 children.

This is Generous Leadership® in action!

We love to hear stories about how students continue their ‘projects’ long after the semester ends. When students learn to see their value and gain confidence in their ability to solve problems that positively impact others, our communities are changed.

Check out the team’s Stay Fresh website at https://foodforhope.net/