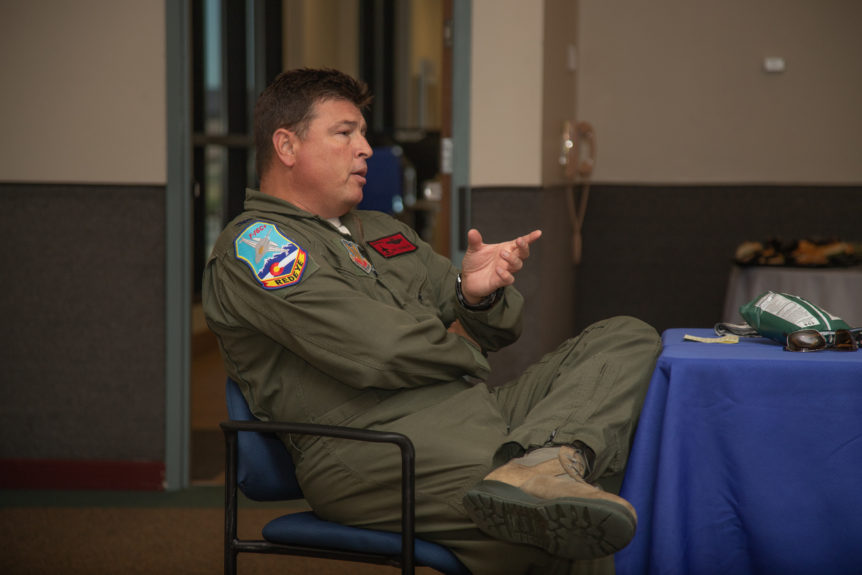 We walked into the conference room, sweaty and exhausted from a morning on the hot tarmac at Buckley Air Force Base, but excited for what was still to come. Seeing the F-16’s up-close both on the ground and as they took flight was truly as “Top Gun” as you could get.

But it was the quality of people we met that morning that stood out, each one of them generous leaders in their own way. They showed us what humility, sacrifice, and ultimate trust for their brothers and sisters looks like.

And now, we gathered with anticipation to hear Col Hanlon (also known by his call sign “Scrounger”), Vice Commander of the 140th Wing, share with us why sacrificial, generous leadership® matters.

Scrounger began sharing that the power of generous leadership® doesn’t come from a position, but from sacrificial service—sometimes seemingy small acts of service. Such service is never done with the intent to manipulate someone to follow you, but always for the other person and only with their best interest in mind.

What happens when leaders give in this way? Scrounger began tell a story of a lower-ranking member who was out on a mission, and who left behind his young family.

“I got a call from one of the pilots in Djibouti. He said, ‘I went out to the airplane today and the crew chief looked like he was ready to cry.’ It was because his wife back home had a flooded house and she didn’t know what to do. She didn’t want to bother anyone for help and the crew chief, her husband, was emotional because he wasn’t there to help.

So a couple of us went down there and found out that the hose to her washing machine was broken and was in fact flooding her home. It was something very simple to fix. But while we were there we found other problems about the house. A lot of problems. They were a young family and didn’t have a lot of money.”

Then Scrounger said something deeply meaningful, yet with such humble simplicity that it was easy to miss. “So we helped them fix their place up.”

And that’s when it happened. This leader of leaders shared his heart with us by allowing us to see how much this act ended up meaning to the family, and so ultimately what it meant to him. Watch this powerful moment for yourself.

Leadership is a privilege, not a role. Real leadership can only happen as an exchange: when others give their trust and loyalty to you first. To be their leader, your only response—if you are to keep their trust and loyalty—is to serve them selflessly, for their sake. Such an exchange creates companies, solutions and movements that can accomplish far more than the sum of their parts.

If you have been ‘appointed’ as a leader by others who follow you, may you understand today the weight of your privilege and choose to respond with love, humility and selfless service for those who chose to give your leadership role to you.